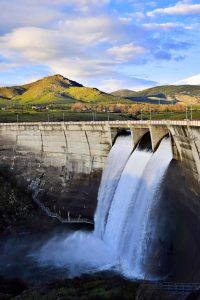 Hydropower Dams. A dam is used to raise the water level of a river and create a reservoir. Water in the reservoir builds up pressure against the dam, and can be released into a powerhouse, where it spins a turbine to create electricity.

Dams with Pumped Storage. When demand for electricity is low (such as at night), water that has been used to create electricity can be pumped back up through the dam to the reservoir, where it is stored for future use.

Run-of-the-River Hydropower. A large pipe called a penstock carries water from a river downhill to a powerhouse, where the force of the water spins a turbine to create electricity. Then the water is returned back to the river upstream.

PG&E’s hydropower system—one of the largest in the country—includes nearly 100 reservoirs. It is built along 16 river basins that flow across nearly 500 miles in our service area. This system employs close to 70 powerhouses, which can provide electricity for close to four million homes.

Hydropower relies on the movement of water to turn turbines. The turbines turn electromagnets that consist of heavy coils of copper wire. The moving magnets cause the electrons in the copper wire to flow from atom to atom, generating electricity.

< Back to Hydropower & You
Onward to the Next Section! >
Page load link
Go to Top