Electricity is a form of energy that starts with atoms. Atoms are too small to see, but they make up everything around us. All atoms are composed of subatomic particles, among which are the charged particles known as electrons and protons. Protons, which are found in the nucleus of an atom, carry a positive charge (+). Electrons, which spin around the center of an atom, carry a negative charge (-). Neutrons also exist in the nucleus of a typical atom and are uncharged.

Electricity is a form of energy that is associated with the buildup and movement of electrons and protons. Electricity can be created by forcing electrons to flow from atom to atom. The force or push of electricity is measured in volts. Electrical systems of most homes and offices have 120 volts.

How Electricity Is Generated 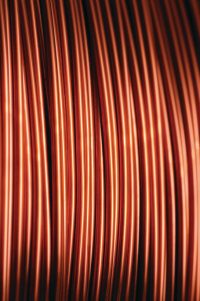 A majority of the electricity is produced at power plants with the use of steam turbines. Mechanical energy is changed into electrical energy by using various energy sources such as coal, natural gas, and oil. These fuels heat water in a boiler to produce steam. The steam, under tremendous pressure, is used to turn a series of blades mounted on a shaft turbine. The force of the steam rotates a shaft that is connected to a generator. The spinning turbine shafts turn electromagnets that are surrounded by heavy coils of copper wire inside generators. This creates a magnetic field, which causes the electrons in the copper wire to move from atom to atom, creating electricity.

The voltage produced by a generator depends upon the number of turns in its coils, the strength of the magnet, and the rate at which the magnet turns. The more turns in the coils, the more voltage is produced.

How Electricity Is Distributed

Power plants do not store electricity, so it is constantly being made and then distributed. Utility companies have to anticipate demand for electricity and distribute it to consumers.

Electricity can be distributed most efficiently at very high voltage. Transformers are used to “step up” or “step down” the voltage along the system of power lines that carry electricity to consumers.

First, the voltage of the electricity produced by a generator in the power plant is “stepped up” when it travels through a secondary coil of a transformer that has far more turns of wire than the primary coil. Each charge that passes through that coil then has more energy than the charges in the primary coil. The current therefore has an enormous voltage when it leaves the secondary coil and then travels through the system of cables and wires from the power plant into the transmission grid. 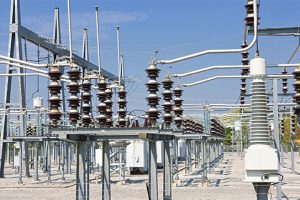 From the substation, distribution lines carry the electricity to other transformers on utility poles or on the ground that reduce the voltage so it can be used in homes, offices, stores, and factories. A cable then carries the electricity from the distribution wires to the house through a meter box. The meter measures how much electricity the people in the house use.

From the meter box, wires run through the walls to outlets and lights. The electricity is always waiting in the wires to be used. The amount of electricity in the lines must be kept at a constant electrical pressure to provide enough power for the appliances and equipment that will use it. A second set of wires carries the current back to the generator in the power plant. These return wires are necessary because electric current must travel in a loop, or a closed circuit.

Alternative energy sources are resources that are constantly replaced and are usually less polluting. They are not the result of the burning of fossil fuels or splitting of atoms. The use of renewable energy is contributing to our energy supply. Some alternative energy sources are: biomass, geothermal, hydroelectric, solar, wind power, fuel cells, ocean thermal energy conversion, tidal energy, and wave energy.

Biomass is renewable energy that is produced from organic matter. Biomass fuels include wood and forest and mill residues, animal waste, grains, agricultural crops, and aquatic plants. These materials are used as fuel to heat water for steam or processed into liquids and gases, which can be burned to do the same thing.With more use of biomass at lower production costs and with better technology, biomass today provides about 11.3% of the world’s primary energy supply, mostly in the form of fuels burned for cooking and heating in developing countries. Use of biomass for electricity generation is growing rapidly and currently supplies about 2.4% of the world’s electricity demand.

Geothermal energy uses heat from within the earth. Wells are drilled into geothermal reservoirs to bring the hot water or steam to the surface. The steam then drives a turbine-generator to generate electricity in geothermal plants. In some places this heat is used directly to heat homes and greenhouses, or to provide process heat for businesses or industries. The United States leads the world in electricity generation with geothermal power. Most geothermal resources are concentrated in the western part of the United States. With technological improvements much more power could be generated from hydrothermal resources. Scientists have been experimenting by pumping water into the hot dry rock that is 3-6 miles everywhere below the earth’s surface for use in geothermal power plants.

Solar power is generated when special panels of solar cells, or modules, capture sunlight and convert it directly into electricity. The electricity produced by solar panels can be used right away, fed into the power grid for others to use, or stored in a battery so it is also available on cloudy days. Solar thin films are light-absorbing materials that are rolled, sprayed, or painted onto rooftops and other surfaces. Thermal solar power uses mirrors or panels containing tiny tubes filled with water that absorb heat from the sun. On rooftops, they can supply hot water for individual buildings. Concentrated Solar Power (CSP) can also be used to create steam that spins turbines at electric power plants. Since 2014, the average cost of solar PV panels has dropped nearly 70%. Today, over 3% of U.S. electricity comes from solar energy in the form of solar photovoltaics (PV) and CSP. Solar power has great future potential in the U.S. PV panels on just 22,000 square miles of land (about the size of Lake Michigan) could provide enough electricity to power the whole country. It is projected that more than one in seven homes in the U.S. will feature a rooftop solar PV system by 2030.

Wind energy can be used to produce electricity. As wind passes through the blades of a windmill, the blades spin. The shaft that is attached to the blades turns and powers a pump or turns a generator to produce electricity. Electricity is then stored in batteries. The speed of the wind and the size of the blades determine how much energy can be produced. Wind energy is more efficient in windier parts of the country. Most wind power is produced from wind farms—large groups of turbines located in consistently windy locations. Wind, used as a fuel, is free and non-polluting and produces no emissions or chemical wastes. Wind power generates about 2 percent of all electricity used in the United States. This is equal to the amount of electricity used by about 8.7 million households in a year.

Fuel cells are electrochemical devices that produce electricity through a chemical reaction. Fuel cells are rechargeable, contain no moving parts, are clean, and produce no noise. Scientists are exploring ways that they could be used as a power source for nearly exhaust-free automobiles and how they can be used at electricity-generating plants. The high cost of manufacturing fuel cells has prevented the mass use of this valuable energy source.

The power of tides can be harnessed to produce electricity. Tidal energy works from the power of changing tides but it needs large tidal differences. The tidal process utilizes the natural motion of the tides to fill reservoirs, which are then slowly discharged through electricity-producing turbines.

Wave energy conversion extracts energy from surface waves, from pressure fluctuations below the water surface, or from the full wave. Wave energy uses the interaction of winds with the ocean surface. This technology is still in the exploratory phases in the United States.

Electric vehicles (EVs) include cars, trucks, vans, buses, trolleys, light-rail, subways, and bicycles. All EVs have an electric motor that turns the wheels and a lead acid, nickel cadmium, or nickel metal hydride battery to run the motor. Most EVs employ regenerative braking, which allows some of the kinetic energy to be stored in the vehicle while decelerating. To accomplish this, the motor is operated as a generator, providing braking torque to the wheels and recharging the traction batteries. This energy can then be used for propulsion or to power vehicle accessories.

Hybrid electric vehicles (HEVs) have batteries to provide electric power, plus a small internal combustion engine usually powered by gasoline or diesel. The batteries get recharged from the gasoline or diesel engine, which shuts down completely at stoplights. While braking, kinetic energy is converted into electricity and then stored in the battery. 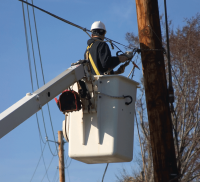 Control or operate machinery, such as stream-driven turbine generators, to generate electric power, often through the use of control boards or semi-automatic equipment. Electric power plant operators control and monitor boilers, turbines, generators, and auxiliary equipment in power generating plants. Operators distribute power demands among generators, combine the current from several generators, and monitor instruments to maintain voltage and regulate electricity flows from the plant. When power requirements change, these workers start or stop generators and connect or disconnect them from circuits. They may use computers to keep records of switching operations and loads on generators, lines, and transformers. Operators may also use computers to prepare reports of unusual incidents, malfunctioning equipment, or maintenance performed during their shift.

Coordinate, regulate, or distribute electricity or steam in generating stations, over transmission lines to substations, and over electric power lines. Also called load dispatchers or systems operators, these workers control the flow of electricity through transmission lines to industrial plants and substations that supply residential electric needs. They operate current converters, voltage transformers, and circuit breakers. Dispatchers monitor equipment and record readings at a pilot board, which is a map of the transmission grid system showing the status of transmission circuits and connections with substations and industrial plants. 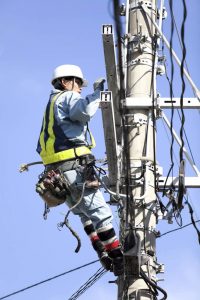 Install and repair cables or wires used in electrical power or distribution systems. They install insulators, wooden poles, and light or heavy-duty transmission towers. Blue-collar worker supervisors directly supervise and coordinate the activities of production workers. These supervisors ensure that workers, equipment, and materials are used and maintained properly and efficiently to maximize productivity. 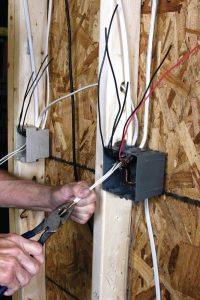 Perform work involving a variety of maintenance skills to keep machines, mechanical equipment, and the structure of an establishment in repair. They are generally found in small establishments, and their duties may involve pipefitting, boilermaking, electrical work, carpentry, welding, and installing new equipment.

Account for about one-fifth of the jobs in the utilities industry. These occupations include customer service representatives, general office clerks, meter readers, and financial records processing occupations.

Include engineers, computer systems engineers and analysts, and scientists.

Account for only a small proportion of total employment in this industry. Technician occupations include engineering and science technicians who assist engineers in research activities and may conduct some research independently.

< Back to Energy Science-SMART!
Page load link
Go to Top